Cairo fully represents the history of Egypt, a unique country, capable of constantly shining in every century and in every era

“Finally I arrived in Cairo, the capital of the country and former residence of Pharaoh with strong pillars. Lady of large regions and fertile lands, she has innumerable palaces and there is no greater city in splendor and beauty! , is a resting place for the weak and powerful, nobles and plebeians, unknown emeritus and famous people. 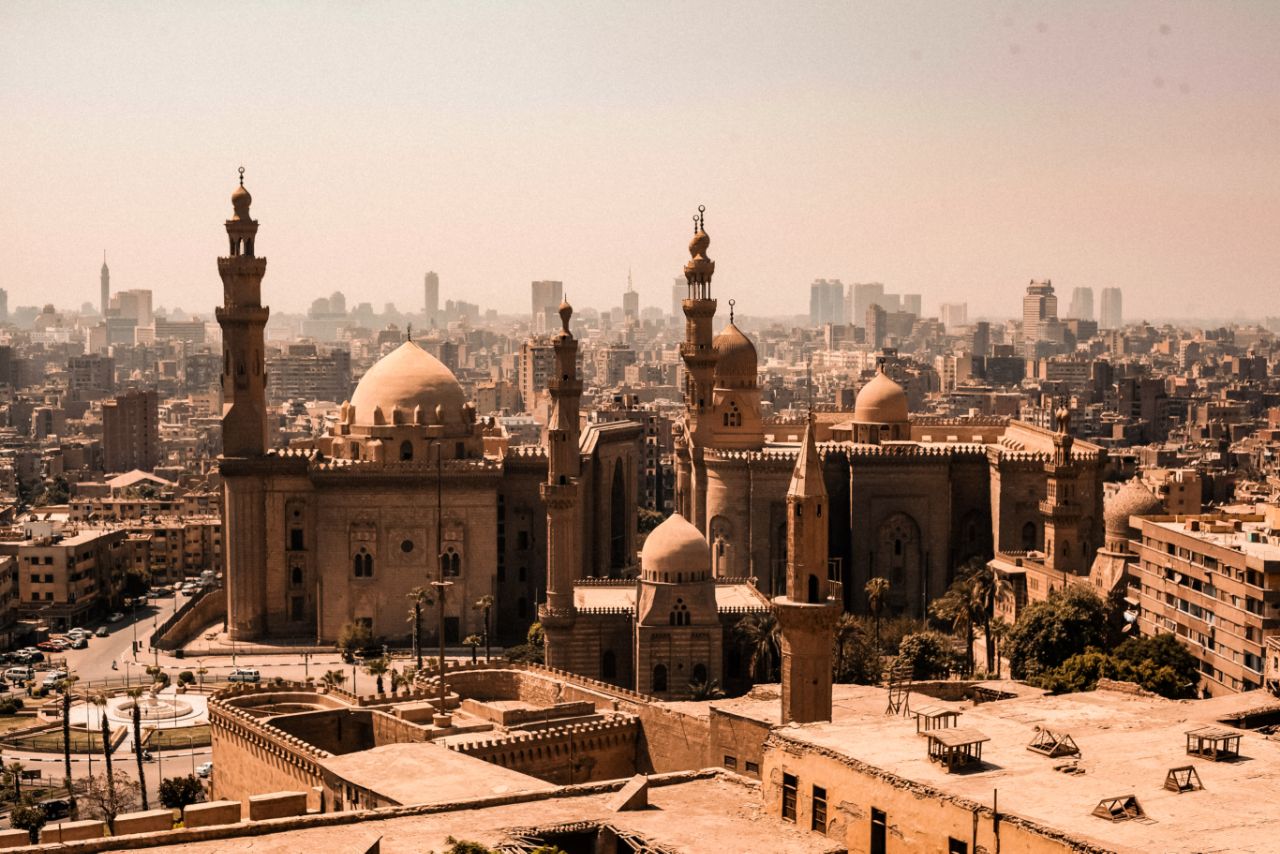 The comings and goings of its inhabitants make it similar to the waving sea; although vast and capacious, it seems impossible to contain them all. Her youth is renewed over time and the star of her horoscope is always in the house of good luck. With vittrice strength she has defeated many peoples and her kings have dominated Arabs and non-Arabs. You enjoy an illustrious privilege, the Nile, which exempts the region from begging for the help of rain and your province […] is a generous land, which treats foreigners kindly.

Although Cairo was founded only in 969 AD, the area has always been considered one of the greatest political and economic centers of the Nile, so much so that Heliopolis, the first settlement to arise in this area and currently part of the city, dates back to the time Pre-dynastic, ie between 3900 and 3060 BC . The period of maximum glory will be during the Ancient and Middle Kingdom, however its importance was not so much related to trade or production, but to faith, which was represented here at its maximum power. Always associated with solar cults, the first deity to be massively honored was Atum, considered the creator of the universe and personification of the great star, who was soon associated with the Great Ennead of Heliopolis, a series of 9 divinities connected to him and who, in a certain sense, intended to define the genealogy of an increasingly complex and confused divine universe. According to tradition, at the origin of everything there was Nun, (male) personification of the primeval ocean, from which first a small hill emerged and then Atum, a god who self-generated giving life to the new gods. Through a spit or a masturbation he then generated Shu, the air, and Tefnut, the humidity; the two brothers then joined together to give life to Geb, the earth, and Nut, the night sky. The latter joined in turn to give life to Osiris, Isis, Seth and Nephthys; the first two will then generate Horus and will be framed as a “couple of Good”, while the second couple will be the one historically associated with chaos and destruction.

Over time, Heliopolis managed to maintain its religious dominance, evolving its cults based on the mutations that marked Egypt, such as, for example, the reign of Akhenaten, the first pharaoh to introduce the cult of Aten, considered by some to be a sort of “proto-monotheism”. During the maximum period of Greek civilization it was considered a center of fundamental studies for Egyptian mathematics and history, but it began to be abandoned with the arrival of the Ptolemies, not particularly interested in the ancient cults and stories of Egypt. With the arrival of the Romans, the Babylon Fortress, a construction of uncertain origin but which should be built by former Babylonian slaves, was moved to its current location, representing for many the first real piece of what will become Cairo. In 640 the Arabs commanded by Amr ibn Al As will arrive here and, within 7 months, they conquered it.

The birth of Cairo

Legend has it that, just when the great Arab leader was preparing the camp to leave for Alexandria, a dove deposited an egg right on the tents, which was immediately seen as a divine signal, so as to leave the camp exactly as it is. was, promising to return there. This place was called “Fustat al Misr” or “Fort / Metropolis of tents”, later becoming the first Arab capital of Egypt and, subsequently, part of the historic center of Cairo; not surprisingly, the first mosque in the country was built right here in honor of the great leader. With the fall of the Umayyads and the rise to power of the Abbasids, the capital was moved for the occasion first to Al Askar and then, during the brief Tulunid rule, to al Qata’i, two cities which, like al Fustat, are part today of the historic center of Cairo.

In 969 the Fatimids took power and among the very first interventions there was the creation of a new capital by Jawhar al Siqilli, a general originally from Ragusa; the work took 4 years of work, but when it was completed it turned out to be a real jewel, soon becoming one of the centers of Islamic knowledge thanks to its prestigious university in al Azhar, one of the oldest in the world. Initially the chosen name was al-Manṣūriyyah, which means (more or less) “The victor”, but when the caliph al Mu’izz arrived here he decided to change it to al-Qāhirah, or “The subjugator”.

Initially the real political center returned to being at Fustat, but, when the crusaders arrived here in 1168, under the command of Amalric I, the vizier Shawar decided to burn the ancient capital, moving to Cairo, which from then on will become the undisputed capital. , also incorporating all the previous capitals. The following year Shawar died and was appointed vizier of Egypt Saladin, who after just two years will defeat the caliph al-‘Adid giving life to the Ayyubid dynasty; from 1176 to 1183 the great Kurdish general built the Citadel of Cairo. In 1250 the Mamelukes, slaves of Central Asian and Circassian origin then used as slaves, took power, giving life to one of the longest and most famous sultanates in history; even if under the latter there was not always great serenity in the country, Cairo grew more than ever, so much so that in 1340 it was the largest city in the world outside of China. From 1348 to 1517 the city will suffer as many as 50 plague attacks, which will considerably weaken the city, then hit by the new spice routes which de facto excluded it from those profits; this facilitated the arrival of the Ottomans who, in 1517, became the lords of Egypt.

With the arrival of the latter the city recovered and expanded more and more, remaining however constantly subjected to Constantinople, which prevented it from aspiring to the glory of the past. The event that really upset the modern history of this city, however, will be the French invasion between 1798 and 1801, a key moment for the beginning of the English influence and for the reign of Mehmet Ali Pasha. The latter was an Albanian mercenary who arrived here following the conflict and, within 4 years, he managed to accumulate a personal power so great that he was named wali by the Sublime Porte, thus putting an end to the power of the last Mamluks, all era used by the Ottomans as a kind of vassals. Although the latter can be called “Founding Father of modern Egypt”, the one who will really revolutionize the city will be his son Ismail, known as “The Magnificent”. It will be under the latter that Cairo had electricity and gas for the first time, moreover, it changed the entire urban plan of the city drawing inspiration from the Parisian one and officially established the ministry of public works, giving an incredible boost to the inhabited center .

Unfortunately, the huge amount of debt accumulated for new buildings will lead Egypt to be an extremely coveted prey by Europeans, so much so that they increased their influence there until they triggered uprisings of the population, which were suppressed by the English invasion of 1882. who de facto occupied the country. This always met with opposition from the population, which rose several times until 1952, when several generals commanded by Mohammed Naguib and Gamal Abdel Nasser put an end to the Alawite dynasty and British power.

From that moment Cairo grew more and more and at an ever faster pace, constantly increasing in importance both as an economic, political and cultural center, so much so that already in the 1960s it had a population of about 7 million inhabitants. Between 2011 and 2013 it was the theater before the Revolution in Tahrir Square, which culminated with the resignation of Hosni Mubarak, and then the coup of Hosni Mubarak, during which there was the massacre of Rabi’a square, in which the mosque of the aforementioned square with the demonstrators inside was set on fire; according to Human Rights Watch the dead were 817, according to the Egyptian government 638 and according to the Muslim Brotherhood 2600.

Laura Allegrini, between Italy and Fairouz

Peoples of Iraq: the Turks of Iraq or Turkmen

The return of Lowkey