The interview we wanted to do from day one. Today we are honored to introduce Chiara Comito, the founder of Editoriaraba, one of our greatest inspirations ever. Without her incredible work, this site probably wouldn’t exist.

K: It may seem like an obvious question but it has to be asked: where does your passion for this part of the world begin? Does it arise from some particular event or have you always been attracted to Arab countries?

C: I’ve asked myself this many times, but I don’t know how to give a precise answer. I have many small clues about my path as a child and as a teenager that are scattered here and there, which every so often I try to decipher. When I was little at home there was a collection of beautiful fairy tales from the world, bound in blue and gold with a hard cover. I remember reading them with my mother and that those fantastic and exotic worlds fascinated me (now looking back I know that I was enchanted by orientalist fairy tales!). In classical high school, I loved studying ancient Greek and learning a new alphabet. I was passionate about ancient history and translation and then I approached more contemporary issues, such as the history of the Jewish genocide during World War II and the decolonization of Africa.

I started reading a lot of Israeli literature and from there I became curious, I wanted to know more about the Palestinians and I went to Palestine. I thought that I wanted to be a co-worker and go to work in Palestine, but that I needed to study Arabic and Hebrew first. So I enrolled in Languages, where I chose Arabic as my first language. And then it was all downhill. I remember that in the first years of university, when I said that I was studying Arabic, people asked me why: was I of Arab origin?

Was I a Muslim? Did I have an Arab or Muslim boyfriend? And I struggled a bit to make it clear that no, it was just a passion – or perhaps a vocation! – like another. Over time I have learned to respond in a different way: now when they ask me why I am interested in these topics, I in turn ask my interlocutor a question. What do you study? What job do you do? Here, you are a doctor / lawyer / editor / logistician / carabiniere / etc .. I am an Arabist, what is the difference between us?

K: When you started the blog you were one of the first ever to bring Arabic literature to the internet, the only one to tell it in Italian. Having to take stock of these 7 years, what would you say? Is there an episode that in your opinion best describes the history of this site?

C: The balance is undoubtedly positive. I learned a lot from all the people I met along this path and above all from the translators from Arabic that I was lucky enough to meet. I am indebted to everyone but in particular to a translator friend, whose teachings have definitely shaped me. Editoriaraba now she is part of me, indelibly. But without “my” readers I would not be where I am now and, I don’t know if I wrote it recently, but I would really like to thank them one by one for the company spiced up with respect and friendship that they have made me over the years.

As for the “scoring” episodes, there was one time in particular when I realized that this blog would give me a lot of satisfaction: exactly one year after its debut, in April 2013, I received an email inviting me to participate. at the Abu Dhabi International Book Fair. I was invited as a blogger of Arabic literature and I was the only Italian.

K: We are avid readers of your site since your “The Arabist’s Top Ten” of November 2012, a list that is still our point of reference today. After a long time, would you change some of the books on the list or would you leave the same ones? Why?

C: In the meantime, I had to go and reread it because I didn’t remember it anymore! This also shows how my tastes have changed over time. It was a very “classic” top ten: there are some texts that are part of the ideal library that every student of Arabic literature should read. In these almost seven years of blogging, however, I have met and appreciated more contemporary texts, written by authors still alive and published in recent years. 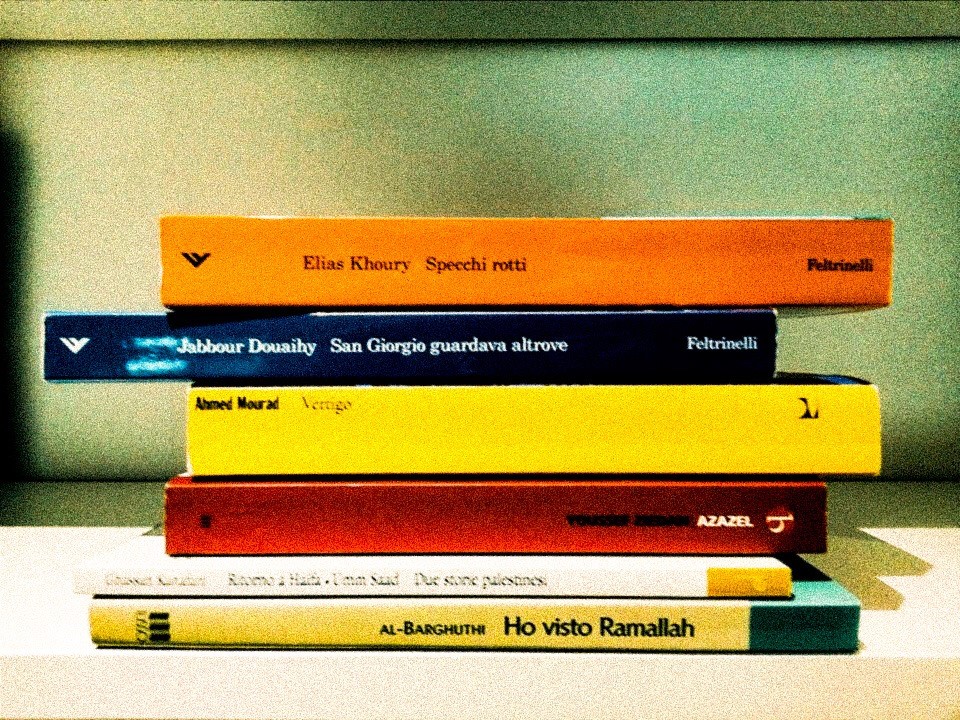 I cannot fail to mention Broken mirrors, by Elias Khoury, St. George looked elsewhere, by Jabbour Douaihy, Like threads of silk, by Rabee Jaber (they are all Lebanese, oops!); The Return, by Hisham Matar; Frankenstein in Baghdad, by Ahmed Saadawi, Anima, by Wajdi Mouawad (oops, another Lebanese!). I like to make known the classics of Arabic literature, but over the years I have developed the conviction that it is equally essential and urgent to make known the new books, those that are published now and that are good books. These authors are our contemporaries, they write about their and our present and it is important to know them

K: Is there an author who has involved you more than the others? Why?

C: What a difficult question! From the point of view of writing, without a doubt the Lebanese novelist Elias Khoury (translated by Feltrinelli): reading his books is truly a journey. He has a way of writing and telling stories that I don’t know how to define other than “elliptical”. He starts from any story, an almost news story, and ends up telling you all the other micro or big stories that revolve around the main one. And you, reader, end up finding yourself inside a whirlwind of words that engulf you and envelop you, until then, almost dazed, at the end of the book the author leads you by the hand to where the story began. All seasoned with an elegant and moving prose.

However, the book that has most emotionally involved me in recent years is The Return, by the Anglo-Libyan writer Hisham Matar. I talked about it extensively on the blog and recommended it to anyone. Two years ago I also had the good fortune to meet and get to know Matar in person, when together with my friends from the Libreria Griot in Rome we invited him to present the book. He is a man of extraordinary elegance and sensitivity, a great writer, a sensitive and attentive intellectual. It is very fortunate to be able to read what he writes.

K: Besides Arabic literature, are you also passionate about other types of Middle Eastern literature such as Turkish or Persian?

C:I would like to say yes, but I’m sorry I can’t go into more detail. Of Turkish literature I only know Orhan Pamuk, but I know that there are many other interesting authors. By the way, let me point out Kaleydoskop, the website of a group of experts from Turkey who always publish interesting content, including literature.

For Persian literature I rely on Ponte 33, a small Italian publishing house that publishes only contemporary Persian literature, and on Francesco Brioschi publisher, who in the series Gli others is publishing a lot of interesting extra-European literature, including several Iranian authors (as well as Arab, Russian and Middle East in general). I take this opportunity to appeal to readers-wanna-be-bloggers: that someone open a blog like mine but dedicated to Iranian literature! I’d like to go deeper into Armenian literature (I’ve only read Antonia Arslan).

K: The year has just begun, is there any particular dream you would like to achieve with Editoriaraba?

C: Yeah, I have a couple actually. I am already working on one and I hope it will materialize within the year. It is a collective project that I really care about, which sees the collaboration of other Arabist colleagues. For the other project, which is a bit like my secret dream (or at least, one of many!) I’m starting to look around. I would not like to act like the important writers or intellectuals who pull it off, but I have to say: I cannot tell you more!

We again thank Chiara Comito immensely for the interview, since we opened this site we have set ourselves the obligation to interview her. Thanks to her Editoriaraba page we discovered our world, without her work this site could never have existed. Really, there are no words to thank her and we will never be able to list how much we owe her. Thank you very much again from the bottom of my heart for giving us permission to make this dream come true.

History of Aksaray, the White Caravanserai of Cappadocia