A genre that has enchanted us so much in recent weeks that we have dedicated an article and a separate series to it. Today we deepen the basics of Gnawa, let us know if you have a preference for the next episode

The Gnawa is a type of music that has its origins from the homonymous population, descended from the black slaves of the subsahara; the word “Gnawa” derives from “Kanawa” or “inhabitant of Kano”, the ancient capital of the Hausa in Nigeria. Initially called to compose the legendary “Black Guard” of the Alawite sultans, this population then settled in Morocco in a definitive way, becoming an integral part of its culture.

Over time, in fact, this genre, previously exclusive to the black culture of Morocco, developed more and more, gradually touching all of West Africa. Particularly interesting is the inheritance that the Gnawa had on decidedly different and geographically distant genres. In fact, many recognize how Afro-American music (blues, jazz, reggae and hip-hop) has undergone very strong influences from this genre, inheriting its foundations.

Originally the Gnawa was practiced to reach a contact with the divine, through specific rites to invoke djinn or particular saints. Through a hypnotic rhythm and the repetition of some phrases, the followers and the musicians were able to enter into a trance, reaching their goal. Characteristic instruments of the genre are: the krakeb, of the kind of castanets, and the gimbri, the characteristic lute.

It goes without saying that this genre has a very strong proximity to everything related to Sufism, mystical Islam. Ceremonies similar to the Gnawa ones can in fact also be found in Turkey with the legendary dervishes and, in general, in all the places where this spiritual dimension has taken root.

Nowadays this genre is increasingly appreciated in more parts of the world and as evidence of this just think of the centrality of Essaouira in international music. In fact, every year in the Moroccan city takes place the most important festival of its kind in the world, which has always attracted great names in music. Among the most significant participants we can mention Bob Marley’s The Wailers, Led Zeppelin or Carlos Santana; an even more interesting detail concerns the role played by the great ma’alem Mahmoud Guinia. 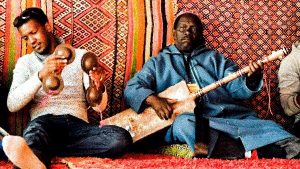 The Maestro, who died in 2015, is still considered today as one of the greatest Gnawa musicians in circulation and hosted for a few months Jimi Hendrix, who had gone to Essaouira to be able to learn the art. The genre then also developed in Algeria, becoming a characteristic element of the Berber culture which, especially in the last century, has produced great artists such as Karim Ziad and the Gnawa Diffusion group. Particular of the latter the singer: Amazight Kateb, son of one of the greatest Algerian writers of all time.

We love the genre and we would like to do a dedicated series, do you like the idea? Is there a particular musician or aspect to start with? Let us know in the comments. Follow us and on our facebook, YouTube and Instagram page, every like, share or support is welcome and helps us to devote ourselves more and more to our passion: telling the Middle East.

“The lion of the desert” by Mustafa Akkad