The story of a true legend of Arab and world music, a woman capable of fully identifying with her people. Not a singer but a storyteller, a music that existed in unrepeatable times. Ladies and gentlemen: Umm Kulthum.

It couldn’t be otherwise. Symbols often don’t need great births. If we then add that Umm Kulthum was born in 1904, in a village in the province of Mansoura, a historically working-class city, we have also done the rest. A humble childhood, however, seasoned with ambition and her great trust in her talent: to involve the soul and ears of anyone who listened to her. Fatima, this is her real name, however, always remained faithful to her origins, honoring her as one does with a flag and always holding up her love for her country and for her people. 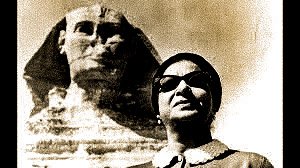 At the age of 12, her father disguised her as a boy to get her into a small theater group that he himself directed. Four years later, she was noticed by a famous singer, Abu El Ala Mohamed, and by a famous lutenist, Zakaria Ahmed, who asked her to accompany them to Cairo. She waited to respond to their invitation until the age of 23, meanwhile continuing to sing her dressed as a boy in numerous small theaters. Her talent was already eligible and evident at the time, so much so that poets of the caliber of Ahmed Rami began writing her songs, many of which will remain in the history of music.

A meeting to change the world

However, it was in 1948 that the most important meeting for Arab music took place. That year he met a young army general, who was a great admirer of him from the very beginning. This young soldier shared the same ideals as Umm Khultum and had decided to revolutionize his country, to resurrect Egypt, definitively freeing it from foreign occupations. His name was Gamal Abd el-Nasser, first dictator of modern Egypt and creator of Arab socialism. That meeting meant that her songs were heard throughout the Arab world, that her ideals and her patriotism were admired and honored from Morocco to Pakistan, transforming her into the first true queen of modern music.

It was from that moment that it was called “Kawkab al Sharq” – “Star of the East”. On the other hand, the Egyptian parliament interrupted its sessions to allow deputies to listen to the singer’s concerts broadcast live on radio. Just one of a thousand anecdotes about the singer, who she always chose to do concerts open to everyone, so that anyone, rich or poor, could enjoy her voice, letting themselves be carried away in the wind and admiring her poems.

In 1967 the singer even received a telegram from Charles De Gaulle, her great admirer. This is yet another anecdote to testify to her crystalline talent, later reported by countless writers and artists from all over the world. The peak of her career reached him by reciting Ibrahim Nagi’s poem “Al-Atlal” “the ruins”, considered by many to be one of her best performances. From that moment on, however, the singer began to have a slow decline due to both her health and her art.

In fact, his style did not fit with the Western one. Her concerts weren’t just a reproduction, they were an almost spiritual involvement between her and her audience, something that fitted differently each time. The goal of Oum Kulthum was not in fact to make a concert, but to make an experience live, modulating it according to who she had in front of her.

In the 1970s she then fell ill with nephritis, a disease that led to her death in 1975. Her funeral is still remembered today as the largest in the entire musical history. The funeral procession in fact extended for 10 km! On the other hand, no one wanted to leave her voice that had guided her heart so much, making it strong during the hard years of the Revolution. Nobody wanted the symbol of an entire nation, of an entire people, to abandon it forever. Too much love was felt for her voice and for her profound words. The affection felt for the queen of Arab music was too much.

Even now countless artists from all over the world honor her by repeating her music. Even today, among any Arab, Pakistani or Iranian, her voice is a symbol of her. Symbol of a generation that gave blood for their country, a symbol of their origins and a glorious past, to be kept close but sharing it with the world, as were the concerts of Umm Khulthum, a unique experience for everyone.

History of Erzurum, the heart of eastern Anatolia

Islam Said and the Diwani style

Shaheed Minar and the native language