A clash that sees the two most titled teams of Anatolia give sweat and tears to become, at least for one evening, the lady of Asia and Europe. Ladies and gentlemen, here is the Kıtalararası Derbi, the Intercontinental Derby.

Galatasaray-Fenerbahce is not just a derby between two great clubs, it is something more, a physical and ideological clash between the two great souls of Turkey: the European one in Galata and the eastern one in Kadıköy.

A rivalry that could recall that between the two Milanese but which has left its ancient warmth intact, making it a challenge that, inevitably, transcends all the others. To make you understand how deep the division between the clubs is, it is enough to discover the history of the two founders, at the antipodes from every point of view.

Ali Sami Yen, founder of Galatasaray, was in fact the son of Sami Fresheri, an Albanian writer and patriot who laid the foundations of the Renaissance. National of his own country, Ali, in fact, is not buried in Istanbul but in Berat, a city in southern Albania historically linked to the Ottoman presence in the country. Yen’s idea was that of a universal club:

“To play with the English, have a name, a color, and beat teams not made up of Turks”

and, given its founder, it could only have international expectations. Yen is also credited with the choice of company colors, yellow and red, as “colors of a flame whose brightness would have led the team to victory over their opponents”.

As much Galatasaray finds its origins from the outskirts of the Ottoman Empire as does Fenerbahce in its center. 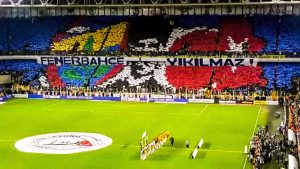 “Fener Bahce” in Turkish means Garden of the lighthouse and the company colors were yellow and white, it was only in 1910 thanks to the intervention of the artist Hikmet Topuzer that the club switched to its current colors”.

The club was, in fact, founded by Ziya Songülen, a descendant of the sultan. The latter did not resist the ban imposed by the sovereign Abdul Hamid II and founded his own club in Kadıköy, then a city separated from Istanbul.

The club owes its stardom in Turkey thanks to the most famous fan ever. In fact, Ataturk never hid his passion for the Gialloblu and his faith is still a source of pride for the fans.

The derby of the flag 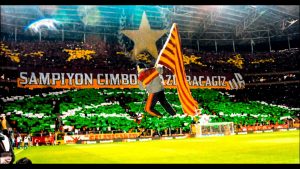 “Among the hottest episodes we can certainly mention the one linked to the Scotsman Graeme Souness”.

The coach who after that derby was always nicknamed «Ulubatlı Souness». The Turkish Cup final of 1995-1996 sees the two clubs from Istanbul opposing themselves and after the first leg, won 1 to 0 by his Galatasaray, the return home of Fenerbahce is played. The Sarı Kanaryalar scored the first goal and forced the match to extra time, but in the 116th minute the Welsh Dean Saunders unlocked it and brought Galatasaray to triumph after 2 two lost finals.

The Scot at that point explodes and plants a yellow and red flag in the middle of the opponent’s field, all hell explodes. From then on Souness will take the nickname of the legendary Turk who first placed the Ottoman flag in Constantinople.

Moses and the Golden Calf