It is a small but illustrious city, all resplendent with lights and stupendous, which contains wonders. It stands at the bottom of a wadi and has a mosque of refined execution with a solid architecture, exquisitely beautiful and very high. 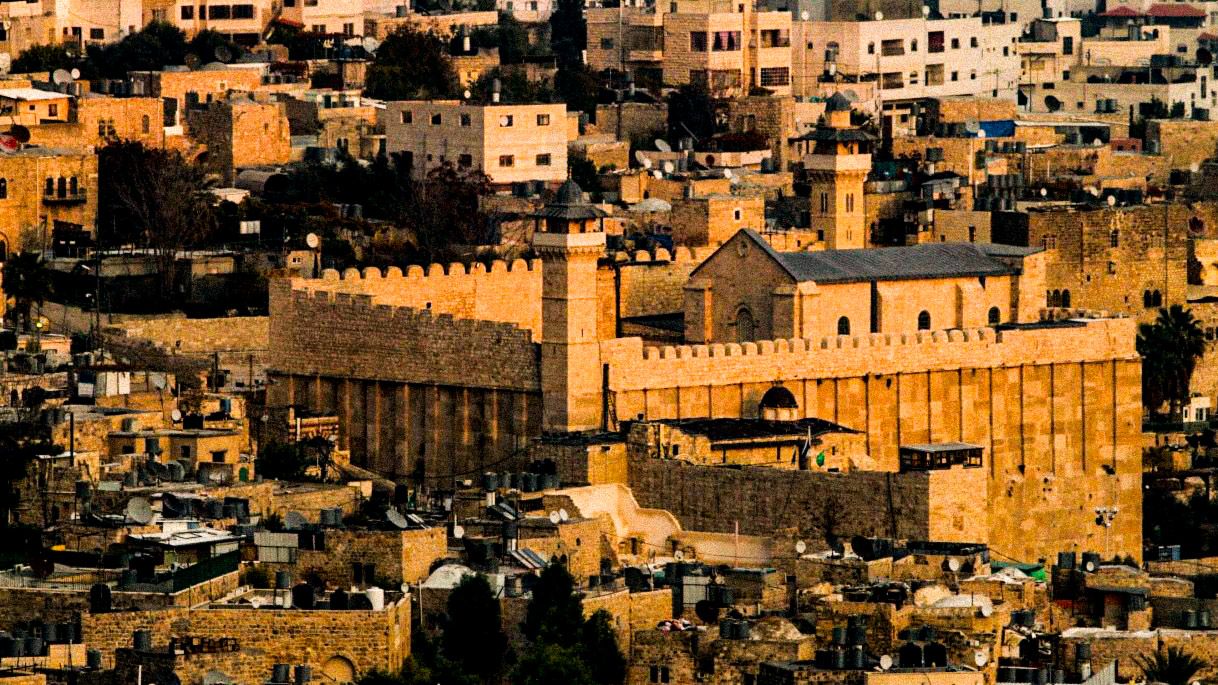 Built in cut stones, they say it dates back to Solomon, who would have ordered the jinn to build it, and inside it houses the noble and holy cave that contains the tombs of Abraham, Isaac and Jacob, faced by the tombs of their respective wives [Sara, Rebecca and Lia].

Hebron, the city where Abraham resides

The area around Hebron was inhabited since the Bronze Age even though it was not founded by the Jews, but by the Hittites, a Canaanite tribe present in the area, namesake of the largest Indo-European empire. According to the Bible, in fact, Abraham turned to the latter to look for a burial place suitable for his wife Sara, who died recently, choosing a cave located just below the city. Here he was subsequently buried together with Isaac and Jacob, making it a highly sought-after place for the whole Jewish lineage, which disputed him for a long time to the Canaanites.

Indeed, it will be only with Joshua that the Jews will definitively conquer these lands, making them for a long time the capital of the tribe of Judahand transforming it into the second Jewish city after Jerusalem. Following the destruction of the Temple of Solomon and the subsequent Babylonian Captivity, the Hebron area was occupied by the Edomites, who, despite numerous attempts to reconquer Israelites, always maintained great influence and control there. Once the Romans arrived, the city became one of the most tense places in the region, so much so that the Byzantines would forbid Jews to reside there.

al Khalil, the City of the Friend

With the advance of the Arabs, Hebron forever tied his fortunes to Palestine, failing however to emerge as it was during the reign of Judah. It should be noted, however, that just with the arrival of the Arabs, the Jews were allowed to return and even build a synagogue near the Sepulcher of Abraham, which in the meantime had become the Mosque of Abraham. Upon the arrival of the crusaders, who made Hebron the capital of the southern district of Jerusalem, the Jews will be driven out again, obtaining permission only from Saladin to return.

With the arrival of the Mamluks, access to the tomb was forbidden for Jews, Christians and, from 1490, even Muslims. It was only with the Ottoman conquest that the city, and in particular the Jewish community, resumed life; in fact, it took advantage of the expulsion of the Spanish Jews, returning to be an extremely important center of Palestinian Judaism. Furthermore, with the arrival of the Turks, a great boost was given to the glass sector, which in a short time became one of the most important exports of all Palestine. Due to a series of measures taken by Ibrahim Pasha, wali of Egypt, and a series of unfortunate events, the city gradually lost its importance, remaining mainly known for the glass and crops, both among the best in the region.

Until the arrival of the British, the Jewish community of Hebron was deeply linked to the Arab-Bedouin one, even adopting their language and clothes. On the contrary, with the birth of the British Mandate of Palestine, the two populations began to live an increasingly hostile relationship, so much so that in 1929 the “massacre of Hebron” was perpetuated. During the latter, some Arab rioters killed about 65 Jews, also ransacking their houses and mosques; it should be noted, however, that many of the Jews who were saved owed it to other Arabs who instead protected them, moreover Ahmad Rashid al-Hirbawi, then president of the local chamber of commerce, actively supported the return of the Jews, so much so that the latter took place only 2 years later.

With the deterioration of the relationship between Israelis and Palestinians, however, the British government decided to transfer local Jews to Jerusalem, so much so that in 1947 Ya’akov ben Shalom Ezra, the last remaining in the city, also emigrated. At the outbreak of the war itself, the city was first occupied by the Egyptians and then, until the 6 Day War, by the Jordanian forces, who helped to expand the city. With the arrival of the Zionist forces, in whose eyes Hebron had a considerable symbolism, the city began to see more and more Israeli settlements, which were ratified with the 1997 Hebron Accords. According to the latter, the city would be divided into two parts: the first, larger, under the control of the Palestinian National Authority, the second, more external, but also with the historic center inside, under the control of the Forces of Israeli defense. This created very strong friction and rifts within the city, so much so that it still becomes one of the symbols of the Israeli occupation in Palestine today.

History of Minya, the heart of Egyptian cotton

Esfahan, half of the world