Nominee for the 2018 Oscar Awards for Best Foreign Film, “The Insult” is an incredible perspective on the wounds of the Lebanese Civil War, never fully resolved in the intimate. The incredible thing, and a sign of Zoueri’s mastery, will be the premise: a trivial insult between a Lebanese Christian and a Palestinian Muslim.

After an emotional exchange between a Lebanese Christian and a Palestinian refugee escalates, the men end up in a court case that gets national attention. In today’s Beirut, an insult blown out of proportions finds Toni, a Lebanese Christian, and Yasser, a Palestinian refugee, in court. From secret wounds to traumatic revelations, the media circus surrounding the case puts Lebanon through a social explosion, forcing Toni and Yasser to reconsider their lives and prejudices. What should have been a trivial altercation, quickly settled and forgotten, instead propels two men to the center of a politically charged scandal in Lebanon-one that reopens historical and political wounds on both sides. When Yasser, a Palestinian refugee and building foreman, and Tony, a Christian nationalist and auto mechanic, go head to head after a misunderstanding involving a drainpipe on Tony’s balcony, Yasser utters an insult Tony cannot forgive. The events immediately following result in the two stubborn men facing off in court where, fueled by the media and a famous right-wing Christian lawyer, old wounds and unresolved tension threaten to divide a nation.

“The Insult” is an incredible fresco of Lebanon today, highlighting many sides of history hidden from most. Thanks to the film, in fact, it will be possible to really enter Lebanese society today, even taking into account all too uncomfortable realities. We are not going to reveal any plot twists, just look at the trailer to get a vague idea already. In fact, in the film the simple division that exists between natives and Palestinians already appears clear and evident, with the latter still living above all in refugee camps or in the suburbs.

Another major watershed is of course religion, a problem that has its origins since the dawn of the Lebanese state. In the past, in fact, the country was populated mainly by Christians, with minorities of Druze, Shiites and Sunnis; However, things changed with the Palestinian exodus, which overturned the statistics and, combined with other and complex issues, then led to the outbreak of the Civil War. In the film, history will make room for itself, dragging Tony and Yasser along with nightmares from their past.

A story from nothing

Doueri’s mastery is evident precisely in the progress of the story that seems to start from nothing, revealing itself with the passage of time. The director shows us how that simple insult instead has a story with much deeper origins, but above all how they are the real motive behind every behavior of the protagonists. Doueri’s work is complex and fascinating precisely because of the introspective work, capable of showing the reasons for each of them and thus providing them with truly incredible depth.

The film, thanks also to its “judicial” approach, manages to chain the viewer to the television screen, telling the story of Lebanon through the eyes of its people, still divided in their depths. 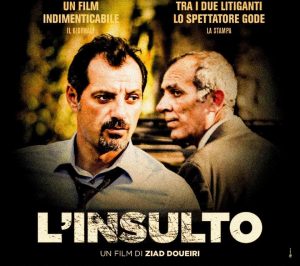