The final theme was “wisdom and patience”, who better than a publishing house specializing in Persian literature to end this fantastic week? Today we present Ponte33, an already legendary publishing house for lovers of the Iranian-Persian world, to be our guide: Bianca Maria Filippini, one of the founders of the initiative.

K: The Ponte33 project was born in 2008, but how did you approach Persian culture? Have you had a figure or something that has given direction to your path, or was it the sum of many small ones?

B: Both Felicetta Ferraro and I studied at the Orientale of Naples, where we obtained a degree and a PhD. Over the years I have taught Persian literature and Felicetta Ferraro as a contract professor of Iranian history. For the birth of Ponte33 “convict” was my stay in Tehran for doctoral research. I was hosted by Felicetta Ferraro, who was then cultural attaché of the Embassy of Italy in Tehran and was an irreplaceable point of reference for those wishing to study in Iran, above all for the great availability with which she put Italian and Iranian scholars in contact.

Ours is a passion that blossomed at the University and cultivated in the years of studies and frequentations with Iran that made us feel happily at home in another country. Being in Iran we have observed an effervescent cultural climate, whose protagonists have always generously involved us. So we decided that we should “bridge” between Iran and Italy to make known the contemporary Persian literature of which nothing was known in our country.

K: In Italy there are several publishing houses that bring Arabic-speaking authors, do you see being the only ones to bring only Persian authors as an advantage or a disadvantage? Why?

B: The fact that we were the only publishing house to translate works by authors who write in Persian for a long time was a source of pride for us, precisely for the value that these works represent both in literary terms but also in terms of diffusion of a rich and profound culture which we would like not only students and scholars to approach but also “simple” Italian readers. Over the years we have found with joy that many readers simply intrigued by the project have followed us with constancy and sincere interest, prodding us not to give up and always do better.

K: In addition to Iran, you also bring Persian authors from Afghanistan and Tajikistan, why did you choose these two countries rather than, for example, Azers or Uzbek authors?

B: Being Iranian with Persian language skills, we decided to make contemporary production known in this language. We were very happy to have known and made known an Afghan writer like Mohammad Hossein Mohammadi, author of “The red figs of Mazar-e Sharif”, who has long lived in Iran, where he studied and imposed himself on the literary scene by collecting critical success.

K: Your first published novel was “My bird” by Fariba Vati, what does this book represent for you? Was it a choice born of fate or did you want this to be your first publication?

B: “My bird” by Fariba Vafi is a novel to which we are very attached, not only for the symbolic value it represents as the first and happy release of our catalog. It is a novel that we love because it is beautiful, well written, and perfect to represent the universality of good literature. 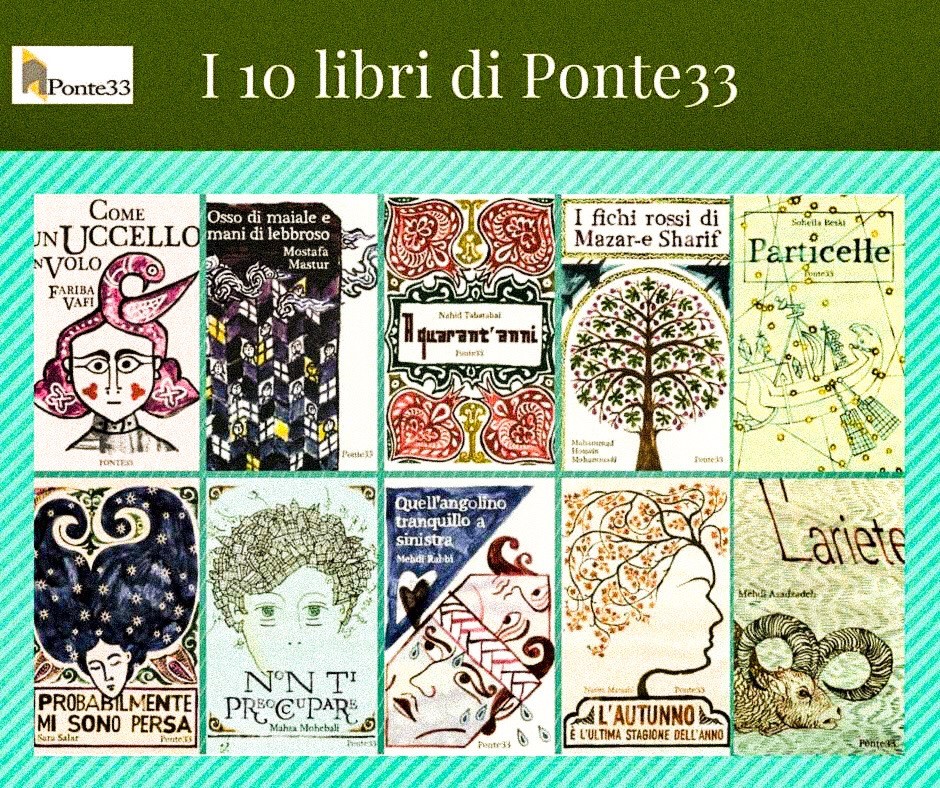 In 2010, the author Fariba Vafi was a guest in Italy for a promotional tour and following her on what was then her first trip outside Iran was a unique experience. Now she is a shy and fine protagonist of the Iranian literary scene and we are very proud to have known and made her known.

K: In Mehdi Asadzadeh’s “The Ram” we are catapulted into a Tehran very different from what we are used to imagining. Which are, in your opinion, the “worlds” present in Iran and which one do you think is most fascinating?

B: Talking about the different souls of Iran is a difficult but fundamental undertaking to combat the stereotypes with which the vision of Iran has so far been “filtered”. What we can say is that the novels that we have published and will publish “mirror” these souls, like tesserae of a mosaic, and our invitation to read them is an invitation to be “destabilized”.

K: Always in “The ram“, the protagonist aims to win back his beloved with a collection of rare books. What do you think the value of books is today? Do you have the same conception in Europe in the Persian world or does something change?

B: In “The ram” as in “Autumn is the last season of the year” the great value attributed to culture by young people stands out, an aspect that amazes us Italians but that represents an important key to understanding the Iran and its young society, proud of its cultural heritage and eager to confront us on the field of culture.

K: The Persian New Year has officially started on 21.03, what are your plans for the future? Is there anything you want to wish yourself and our readers?

B: With the new year we have introduced new energies into our project, especially thanks to the collaboration of two new partners, Giacomo Longhi, a young and talented translator, and Stella Morgana, an excellent scholar of Iranian society. We are sure that we have sown well and that the fruits will still be many. Readers and authors ask us!

We still deeply thank Ponte33 for giving us the opportunity to tell their fantastic editorial adventure. Initiatives like these are invaluable for connecting two cultures that are only apparently distant. You can also follow Ponte33 on Instagram and Facebook. The week ends with the last symbol, the serkeh, or vinegar, the perfect representation of “patience and wisdom”. Follow us on our facebook, YouTube and Instagram page, every like, sharing or support is welcome and helps us to dedicate ourselves more and more to our passion: telling the Middle East.

“The Thief and The Dogs” by Nagib Mahfuz

Days of the week: Tuesday